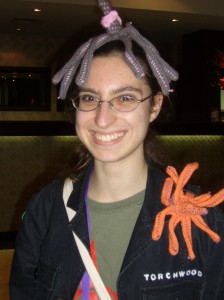 One might think that dancing to geek soundtracks and wearing knitted squids on your shoulders has nothing to do with writing novels but if one is part of the speculative fiction fraternity, NatCons are the place to be – and isn’t it tough enjoying the many attractions they offer!

I live at Bargara so WriteFest and the Bundaberg Writers Club is my family and the Queensland Writers Centre is my gracious aunt, but the Australian spec fic community is my tribe. This group gathers often to exchange spiritual food, oral history and their many views, but travelling interstate is economically challenging so up until this year, I’d only attended one NatCon (National Science Fiction Convention) and one WorldCon. Thanks to the Regional Arts Development Fund (RADF)*, I was able to catch up with my tribe in Melbourne this year, at the 51st National Science Fiction Convention so I wanted to share my experiences with fellow fans and authors, in the hope of inspiring more newbies to next year’s Con.

What is a Con?  For the greenhorn, a Con is a gathering of like minds. In our case: speculative fiction lovers. Science Fiction (Sci Fi) cons started in England and America in the late 1930s, but regular events did not appear on Aussie soil until the 1950s. From its Sci Fi beginnings, Cons now encompass all tentacles of spec fic, including fantasy and paranormal, and there are many varied cons, such as Comic and Trekkie cons.

NatCons comprise panels (where experts and non-experts engage in lively debate), book launches and/or signings, writing workshops, public readings, awards ceremonies, a booksellers and merchandise room, kaffeklatsches (talking to an author over a cup of coffee) and, if you’re lucky, a costume ball. More importantly, there are lounge areas, including a bar and restaurant, where you can sit and chat for hours about our favourite topics: spec fic books and film. This year’s NatCon, Continuum 8: Craftonomicon, sported an ocean/craft theme. Stallholders sold knitted squids and the Con Mascot was Octavius Octonarii, a crafty octopus.

Stepping Up:  When I attended my first NatCon five years ago, I was overwhelmed by the warmth of the organisers and attendees and spent my weekend listening intently to the panels and bribing authors to sign their books for me. I had started my writing career but I was just dipping my toes in the water.

This year’s Con was about stepping up so I volunteered (Con presenters are not paid) to speak on four panels, present a children’s writing workshop and do a public reading of my urban fantasy manuscript, Shahkara.

I was nervous about sitting in on a panel and being expected to offer my educated opinion. Educated? I grew up on a farm. I could tell them when the lambing season starts, but discussing gender issues in spec fic or hard science versus acceptable science? There and then, I reined in my doubts. After all, I’m a professional writer who’s worked as a journalist for 15 years, has manuscripts under consideration with major publishers and teaches writing classes. I have a BA in communications and literature and I’ve read widely, with a genuine fan’s opinion on every book, film and TV series out there. The truth is that I was qualified to speak on the panels (any fan at the Con is) but I had to put myself “out there”, no longer hide in the shadows of the audience. I discovered the panels were very organic and awesome fun – and great for meeting strangers-who-soon-became-friends, when we found out how much we had in common with each other (Dr Who, books, cats, Joss Whedon… and that was just the entree). I was tweeting to these friends before I even stepped through Rydges’ hotel doors on the Friday – and then met some of them in the hotel lobby as the concierge organised luggage.

Embrace social media: Tweet and Facebook fellow attendees before you fly to the Con – they’ll be happy to get to know you. All Cons have an individual hash tag and Facebook page. Start from there and work your way up.

Volunteer: If you’re shy like me, there’s no easier way to meet and chat with people than being part of the event. Volunteering for panels, or even putting out chairs or sticking up posters, leads to friendships with the like-minded – cool people that you can hang out with for the rest of the weekend. I was even given a video camera and asked by a Publisher to film a book launch on the Friday night (I never found out if the footaged looked any good, but it gave me a buzz).

Stay at the Con hotel: The program starts at 9am some mornings and goes til midnight each night so you’re only running to your room to change clothes or nap. Keep an apple or muesli bar on you because you won’t always have time to queue for food (and the nosh can be expensive).

Sign up for workshops and Kaffeklatsches ASAP: Sessions fill up fast and you don’t want to miss out. My favourite part of the Con is listening to an author’s thoughts, experiences and life story, over an coffee, kaffeklatsche.

Hydrate and Relax: It’s a four-day marathon so drink lots of water, eat, exercise and get some sleep.

Talk to fellow authors, attend all launches and buy their books: We can’t buy every book at the Con but buying a particular author’s book is the most genuine form of admiration. The extra bonus is that book launches often offer free drinks and food. Twelfth Planet Press even gave away free cupcakes, inspired by their authors. Check it out here.

Seek out your old and new friends and take pix: I was so happy to catch up with old friends, QWC family members and Melbourne-based friends of my own author friends! I always get to the end of a Con and realise I’ve never taken enough photos. Damn it, Janet!

Hang out in the bar or restaurant: Dining or having coffee with fans and authors is a delight and because I’m a fan girl, I still go, “Squee!” I used to attend every panel and workshop on the program (within the time/space continuum). Now I skip panels so I can meet new friends. The costume ball and other social events are other great ways to meet new friends.

Pack PostPaks so you cheaply mail home all those books you buy, thus avoiding luggage limitations.

Allow an extra day to explore the host city – visit its bookstores and state library. I also found out too late that a group of Con-goers did a trip around Melbourne the day after Continuum. Chat to others about possible post-Con trips while the Con is still happening so you don’t miss out on an extra day of activites. Better still: host a tour yourself!

Future Cons: Tempted to be a newbie? Here’s the dates & links for the next round of Cons:

*RADF is a Queensland Government and Bundaberg Regional Council partnership to support local arts and culture. The author gratefully acknowledges this support which helped fund her trip to Melbourne.

4 thoughts on “A Newbie’s Guide to the Con”