Thirteen years ago, I stepped into the enchanted, battle-lashed world of Rowena Cory Daniells’ The Last T’En and never really stepped back. Her characters enthralled me and I loved the detail and political intrigue of her world. I was delighted when I heard that Rowena had written a prequel trilogy. The Outcast Chronicles, set 600 years before The T’En, are packed with magic, secrets, over-riding ambitions and misplaced loyalties, and I couldn’t wait to ask her about them.

Cherie: What inspired you to write The T’En and did The Outcast Chronicles grow from the world building of your first trilogy?

Rowena: Most books end when the kingdom is won and the last castle falls. I started the original T’En story when the castle was falling. I’d been reading Machiavelli’s The Prince and was fascinated by the challenge of holding a kingdom once it has been conquered. Once General Tulkhan conquered Fair Isle, he had an army outnumbered by the conquered people. To hold onto what he’d won he needed Imoshen, last of the royal family. Meanwhile, Imoshen had to choose between prolonging the battle by siding with the rebels or trying to smooth the transition of power to ensure her people survived.

A couple of lines in the original trilogy about Imoshen’s namesake, Imoshen the First, made me think about how history is written by the victors and I wondered why Imoshen the First had fled her homeland. What had been hidden when they wrote their history and what had been lost in the six hundred years since the T’En came to Fair Isle?

From this, the story of the first Imoshen grew.

C: Tell me about the main characters in The Outcast Chronicles?

RCD: In the original trilogy the rivalry and distrust between the T’En men and women was only hinted at. In the prequel it divides their society. The males live in brotherhoods while the females live in sisterhoods. The T’En women are not as physically strong as the men, but they have more powerful gifts. Four hundred years ago there was terrible rivalry between the brotherhoods and T’En children were killed. The sisterhoods united and forced a covenant on the T’En males. The brotherhoods had to give up their pure T’En children to the sisterhoods to rear. Naturally, the men resent this. 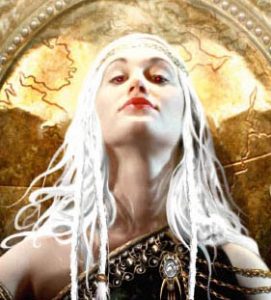 ile, the True-men and women fear the T’En, who live segregated lives on their estates or their island city. No one knows why some perfectly respectable True-men produce children with T’En traits but, if this happens, these babies are sent to the T’En and never spoken of again.

Imoshen (left) was raised by a covenant-breaking brotherhood, who hoped to use her to overthrow the sisterhoods but she escapes and seeks sanctuary with the sisterhoods, who punish her father’s brotherhood for breaking the covenant. Imoshen realises the divide between the T’En men and women is making her people vulnerable but the distrust is so deeply entrenched the sisterhood leaders won’t listen to her and the brotherhood leaders hate her.

Sorne (right) is the disinherited son of the True-man king. Because he was born part T’En (a half-blood Malaunje), he can never sit on the throne. His father sends him away to be raised as a weapon to infiltrate the T’En city and discover their weakness. The king wants to rid his land of T’En, both full- and half-bloods. Soon, Sorne will have to

decide where his real loyalty lies.

Tobazim (left) is more scholar than warrior. Inspired by old tales of honour and glory, he goes to the T’En city hoping to win stature. But only the strongest and most ruthless males rise to lead the brotherhoods and his brotherhood’s leader is a cruel tyrant. How can he serve his brotherhood when all they respect is violence?

ive and loyal, Ronnyn (right) was born pure T’En, while his sister Aravelle (left) was born a half-blood Malaunje. Normally they would have been separated at birth, but their Malaunje parents ran away from the T’En so they could keep Ronnyn. Now that Ronnyn is twelve, his gift starts to manifest. He and Aravelle keep it hidden because if they return to the T’En their parents will be punished. Before long they realise untrained power is dangerous.

This is a kingdom forged in magic, divided by distrust and betrayal. This is a fantasy-family saga; the characters are linked by blood, love and vows as they struggle with misplaced loyalties, over-riding ambition and hidden secrets which could destroy them. Some make desperate alliances only to be betrayed by those they trust, and some discover great personal strength in times of adversity.

C: Many of your readers strongly identified with Imoshen of The Last T’En. Do you think that Imoshen the First in The Outcast Chronicles will resonate as strongly?

RCD: Readers have told me I do terrible things to my characters. I like to test them by putting them in situations that force them to make difficult moral choices. Imoshen the First is faced with terrible choices, but she tries to stay true to what she believes is right. So in that way she is like the Imoshen of the original trilogy.

C: How did you make your first book sale?

RCD: My very first book was a children’s book and it was picked up from the slush pile. The Last T’En trilogy was sent to a publisher before I had an agent. Out of the blue the editor rang me and made an offer on it. I said, ‘I’ll just call my agent’, hung up the phone and danced around the kitchen before madly contacting a writing friend for advice about agents.

C: Did The Outcast Chronicles require a lot of world building? 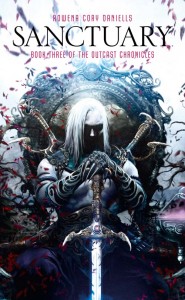 RCD: I’ve been working on The Outcast Chronicles for ten years as my writing group know. I kept putting drafts of the book in for critiques and they would say ‘too much world building and back-story’. So I would go away and rewrite from an earlier point in the narrative to reveal the back-story.

With regard to the world building, I felt the question of magic hadn’t been dealt with in fantasy books (or at least I hadn’t come across it). After all, how would we feel if there were people amongst us with gifts? I think those without powers would resent and distrust those who had the gifts. Then you have to ask yourself how did the gifts arise? I theorised that it was a recessive gene, which a few True-people carried. Sometimes, they produced Malaunje babies. And sometimes, when these half-bloods grew up and had children, they produced pure T’En babies with full-blown gifts. I thought the power of these gifts would be expressed differently in men and women and this would affect the way the genders interacted.

Power must have consequences. This would shape the people and their society.

C: You and your husband own a company that designs book trailers and covers. What were the challenges of creating a book trailer for your own book?

RCD: I do know the characters and the world, but in a way this makes it harder, just as it is harder to write a synopsis of your own book because you know all the details. Luckily, I’d been keeping a resonance file on The Outcast Chronicles to give to the cover artist, Clint Langley. He produced some beautiful covers and my publisher, Solaris, produced a terrific advertisement for SFX magazine. We liked the way they summed up the story and this was what we worked from to create the trailer. 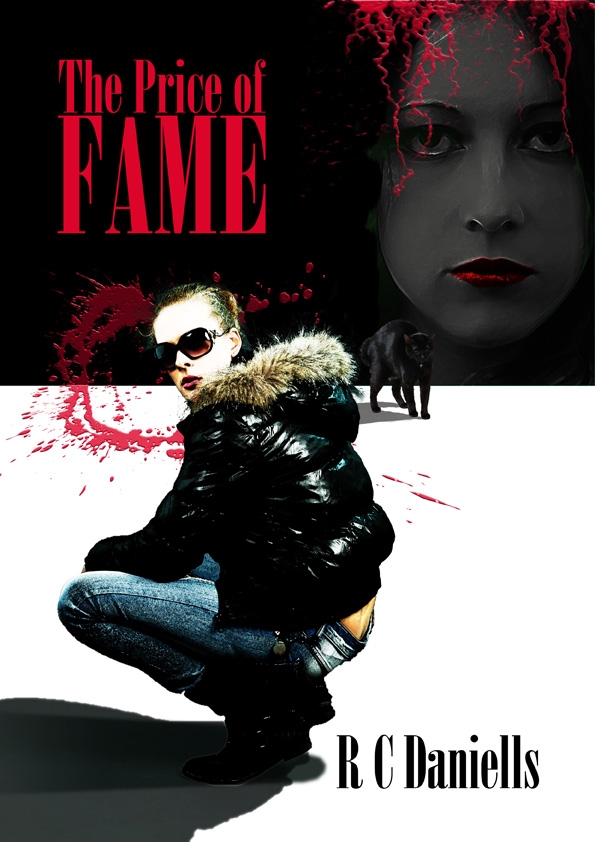 C: You have another book due out this month, a gritty noir crime with a touch of paranormal, to be published by Clan Destine Press. Was it difficult crossing genres?

RCD: As a reader, I read across genres. My short stories and my children’s books cross several genres. It is just my published grown-up books that happen to have been fantasies. I wrote the first draft of this book back in1981. I’d written around 10 books before I was twenty-five and two of those were SF mysteries. So this book wasn’t a big step outside my comfort zone.

This book has been a long time in gestation. I wrote my first draft when I was 23. When I was 36, I corrected a couple of spellings and sent it off to the Harper Collins $10,000 Fiction Prize and it made the long-short list. At that point it was the 80s story about the band, the street kids and the taxi driver who tried to help them, with just a hint of paranormal.

In my 40s, I decided to add another layer to the story. I created the contemporary layer, set 25 years later, told from Antonia’s point of view. She wants to make a documentary about the band, which rocketed to fame after the murder of one of the girl singers. I wanted the story to work on two levels, as a mystery and as a paranormal. To know that Lindy Cameron, award-winning mystery writer, selected The Price of Fame as one of her Clandestine Press books is very satisfying.

C: You have six children but you’re a writing powerhouse. What’s your secret and do you have a writing method?

RCD: My children are older now. Back when they were little, I used to write with them on my lap, or in the moments between dealing with dramas. Now, I snatch moments between work and running after teenagers and twenty-somethings, and elderly relatives. With every book I learn more about the craft of writing. With every book I feel I could have done better. I don’t know if I’ll ever be satisfied with what I write but I love the challenge.

C: What’s your next big project?

RCD: I’m currently preparing the original T’En trilogy for a reprint. I have the rights back so I’m going to release them as e-books and as print on demand. Then I have to finish the next King Rolen’s Kin trilogy. I also have a duology fantasy set in a deadly tropical paradise, and I’ve been working on an alternate history set in Australia in the 1830s.

Sometimes I wish I could just run away from life, live like a hermit and do nothing but write. I’d get terribly introverted and forget how to talk to people so it’s just as well I can’t do this.

C: What’s your advice for aspiring or emerging authors?

RCD: I have a lot of useful posts here.

Read widely across genres, fiction and non-fiction. If you find an author you like, read their books for fun. Then read the books to see what works, then read them a third time to see what can be improved. Usually, on the third read, you can see the story bones.

Write the things you love to read. Join a critique group, submit to the group and rewrite. Critiquing other people’s stories is a really good way to build your writing craft muscles.

Once you’ve done that and feel you are ready, submit to something like the QWC/Hachette Manuscript Development Program. This is a great way to get noticed.

6 thoughts on “Despised mages stir cauldron of intrigue and rivalry”