My husband laughed at me last week when I complained that it was so warm that it could almost be spring. ‘My Love,’ Shane said (he always calls me that). ‘It’s September. It is spring.”

As one gets older, the years fly by quicker but I’ve felt like I’ve been in a vacuum/rollercoaster in 2013. For those who only hear my news via this website, I wanted to share my big happenings of 2013.

I started the year working on and polishing the final draft of The Blood She Betrayed, before I sent it back to my Publisher and her red ink, but on January 26, my coastal hometown of Bargara was hit by six tornadoes. Relentless rain from ex-Cyclone Oswald that same weekend brought the biggest floods to our city of Bundaberg more than 120 years. 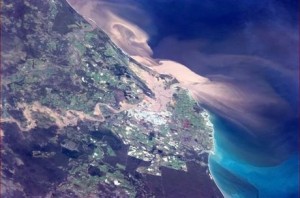 Thousands of people were evacuated and hundreds of homes were destroyed or damaged (including 70 shops). Our shopping centre had to be closed for four months for repairs. Homelessness and unemployment hit our city and we all helped pick up the pieces and rebuild, even if it was in small ways. PS: A big thank you to astronaut Chris Hadfield, who took this photo of the Bundaberg floods from the International Space Station and shared it on Twitter. Gotta love an astronaut. 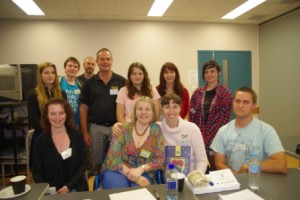 After breaking my left leg (a full tibia plateau that needed surgery, a plate and 16 screws) last year, I thought I’d be safe from hospitals this year but I broke my right patella on April 30. I had to hobble around on crutches, my leg in a straight brace, for three months. I presented two workshops at this year’s WriteFest. Here I am with my Dark, Dangerous, Delicious participants – they were awesome! (Can you tell I’m sitting in a wheelchair?) 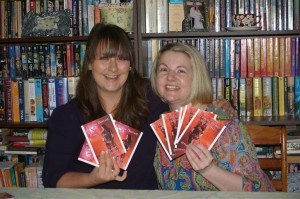 APN Journalist of the Year Vanessa Marsh interviewed me for an article in the Bundaberg NewsMail’s Weekend magazine to announce the upcoming launch of my novel, The Blood She Betrayed. I was delighted that Vanessa was chosen to do the interview because we used to work at the NewsMail together and I’ve taken a keen interest in her career ever since. It was an ego-tripping experience talking about myself and my book for an hour – I remembered when I was younger and nobody wanted to hear me talk about my stories. The interview was extra special because my parents were staying with me at the time and Dad added his two cents 🙂 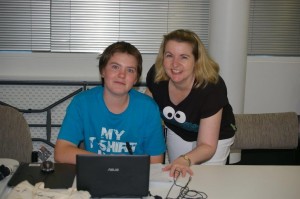 The floods and a broken kneecap prevented me teaching writing classes at the library for six months but we revived the Creative Dragons classes in Term 3 and had a ball. Here I am with Michael, who writes sci fi military novels. 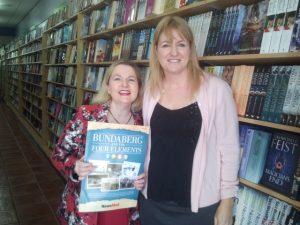 The NewsMail‘s highly anticipated Bundaberg & The Four Elements book (compiled and written by myself under my real-life persona last year) was launched in August. Fantasy author Louise Cusack and I had visited Bundaberg Dymocks that morning to give them chocolates on National Booksellers Day. We nipped across the road so Lou could buy a copy of my 216-page Elements book and customers were queuing to buy copies. When they found out I’d written this book, I ended up being asked to sign my name on books at the counter. Naturally, this was all good practice for my upcoming The Blood She Betrayed book launch!

Bundy Writers friend Laree Chapman and I got to feel a Harley between our legs when we attended the ReIGNITE seminars to regenerate business growth in Bundaberg after the floods. 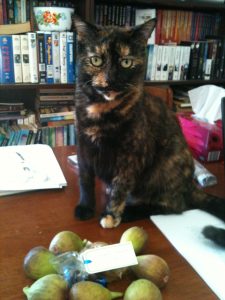 Finally, I saw in a major birthday this year but didn’t have time to celebrate because I was preparing for the book launch. Here’s my cat Scamp, trying to decide if she should eat my birthday figs and chocolate chip cookies. Shane and I also celebrate 10 years of marriage this month. Again, I’ll probably spend more time with The Blood She Betrayed than my husband but that’s okay. He loves me and he’s my Muse 🙂

That was it for the first eight months of the year and now I’m looking forward to GenreCon in October when Clan Destine will release the physical book. Launching a debut novel has been a steep learning curve for me, but I’m hoping the process will get easier in coming years…

6 thoughts on “What have I done all year?”