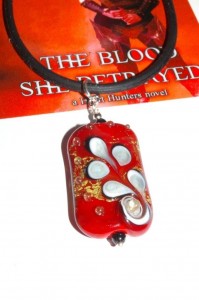 An exquisite, one-of-a-kind necklace was designed by Moore Park artist Chris (Ekko Glass Designs) last year to celebrate the launch of The Blood She Betrayed.

The red, white and gold mirrors the shades of the TBSB cover: the red represents Shahkara and her Taloner blood; the gold the spritz of the Twilight Mists; the silver-white is the tail spines of Shahkara’s dragon key – and the many paths she must take to find the Elnara.

The Ekko Glass necklace and a gorgeous heart bracelet made by The Bling Thing, Hervey Bay, were to be the prizes at The Blood She Betrayed FaceBook launch party, but were withdrawn when the eBook was unable to be launched on the night.

Instead, I’ve held these two prizes over until early this year when I knew the eBook would be available (and I’d be back from my physical author tour and able to give it some attention again).

To enter, all you have to do is buy a copy of The Blood She Betrayed and email your proof of purchase (Amazon or Dymocks receipt, etc) to me at cheryse (at) quietdawn (dot) org

Those who have already bought a copy of The Blood She Betrayed in 2013 (either eBook or paperback) are also eligible – just email me your proof of purchase – and/or remind me where I signed your book for you during the physical author tour.

Winners of the Hearts & Talons giveaway 2013: 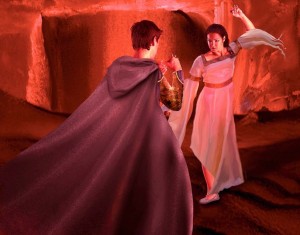 The Name a Character after a Reader contest was conceived in September last year with the goal of stimulating The Blood She Betrayed eBook sales prior to the Bundaberg paperback launch. Since Clan Destine Press was unable to release the eBook until after the September Facebook party and the Brisbane and Bundaberg launches in October, Iopened the contest up to all readers who bought copies of the eBook or paperback during October.

The winner is… *drum roll* … ex-Bundy writer Emma Gough, who attended one of the Brisbane book launches.

The brilliant plot twist to this contest is that I had *already* created an Emma character in The Ghost She Killed so, even though Emma’s happy to have a multi-layered characters as her namesake, I have also drawn two more names – just to make it a little more fun. I will weave these two names into my current manuscript in the coming months.

I’d originally hoped to draw out a man’s name as the winner as I have a few fabulous new male characters in The Ghost She Killed, but that didn’t happen so my little mind is now working out what roles Shaye and Krystal will play in my work-in-progress. I’m almost certain one of them will become the namesake for one of the sword-wielding Goth girls, introduced to readers in The Blood She Betrayed. We’re resurrecting a few of those assassins for the next book.

The namesake character may not have large roles in The Ghost She Killed, but they will certainly play a part – even if it’s just as a dead body 🙂

“That can’t be your idea of Max!” Reece’s eyes glint in the lamplight. “I imagined him as Seeley Booth!” 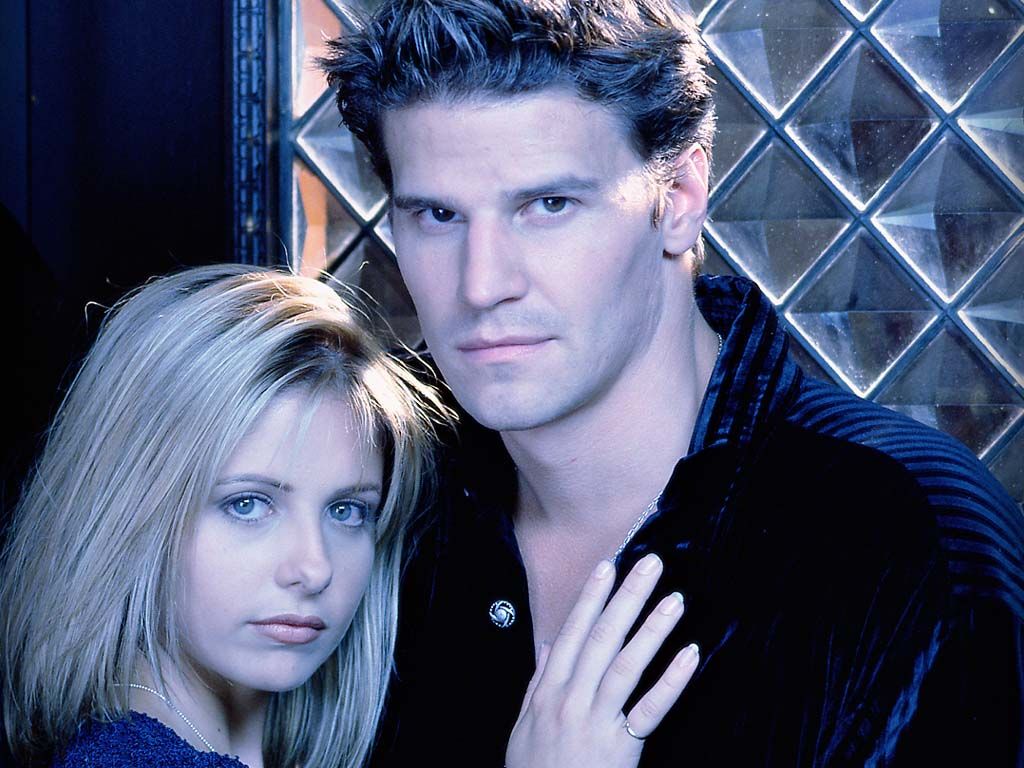 My long-time mental image of my Shahkara sidekick (read: your average rich-but-tormented boy next-door) splintered into pieces and was sucked into the Bermuda Triangle. How can you compete with the Greek-god magnificence of a young David Boreanaz? I mean, Bones‘ Special Agent Seeley Booth is more than a tad too old to play my Max, but now I’m remembering him as Angel…

It’s the wind-down to our monthly What If meeting. We’ve laughed and gossiped over pizza, even critiqued a few stories. The moon’s perched high in the dark sky and it’s time for them to head home. Still, they remain chatting on my doorstep, reluctant to return to normalcy after another delicious night of spec fic. Our discussion of all things dark and fascinating bubbles over like a witch’s cauldron – and my ego feeds on the delight of Reece suggesting that my lead character is as hot as David Boreanaz.

“You mean, Boreanaz 15 years ago?” I clarify. When he was the brooding Angel, tortured vamp with a soul? Seeley Booth is still too sexy for his own good but – finally inching towards middle age and sporting a haircut that, well, really, doesn’t do a Greek God justice – he doesn’t exactly encapsulate my Max, two weeks’ shy of eighteen in the opening pages of Shahkara.

“Yeah.” Reece nods his head. “When he was younger.” It’s not surprising that Reece, our resident weapons/army/martial arts geek latched on to the image of DB. After all, he’s an avid fan of Bones and Castle and believes Nathan Fillion rocks (my hubby agrees). I rather like the idea of Max looking as hot as David Boreanaz (if he were eighteen again). When one thinks about it, there are pinches of geek inside Seeley Booth, even though he disparages “the squints” on Bones. 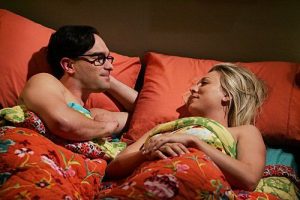 to thinking about the people in our books and who they look like in relation to actors, other story characters and people from our own lives. When I create heroes and villains, it’s their personalities and the power of their stories that come alive in my head, not their physical descriptions. I don’t think any of my characters are any one person in particular, but reflect aspects of myself and my family and friends – as well as traits from every loosely-imagined villain and monster that I hid under the sheets from as a child.

Pretty much all my heroes have a little bit of the geek in them, probably inspired by My Muse (and very geeky husband), Shane. Geeks make gorgeous heroes and are highly undervalued and under-rated. After all, who doesn’t love Big Bang‘s Johnny Galecki as he lounges in bed, bare chested and no spectacles? Much to William Shatner’s surprise, Leonard Nimoy became a heart-throb to female fans everywhere after he journeyed through frontiers where no man had gone before, and are we really as compelled by MacGyver when Michael Shanks is on the same Stargate screen?

My hero Max doesn’t realise his compelling story. Taunted by his father and plagued by his mother’s and brother’s deaths, Max is as lost as Angel when his story begins. His dreams are dead and he no longer wishes to exist – until one incredible woman changes his life.

Shahkara may not be a vampire slayer, but she is a Taloner slayer. 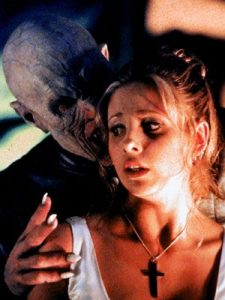 An exiled princess on the verge of womanhood, Shahkara is smart and sassy. She wields a sword as well as any warrior and she can rip out a demon’s heart faster than you can order take-away.  And despite her dark brunette looks and no cheer leaders in sight, Shahkara reflects many of Buffy’s greater qualities. They both share similar dreams, longings, fears and courage.They are both compelled to save lives and save the world – through slaying yet another demon or dark god.

Shahkara and Buffy both want that normal life they were promised at birth but there will always be another quest or apocalypse. Shahkara is now on the quest to end all quests. She needs to destroy the heart-thirsty Taloners once and for all – and it will take all her strength, all her smarts and all her training to achieve it.

Fortunately, if a hunky, smart earth boy on the side can help her achieve that goal (without him ending up a corpse), then it will be a very good way to end the day. David Boreanaz, eat your heart out.